Since launching his first business in 2005 when he was just twenty-one, Anthony Morrison’s career has expanded exponentially. A self-taught Internet mogul, Morrison devised a one-man business operation while attending college full-time. The success of that venture saved his family’s fortunes, and from there Morrison proceeded to devise a systematic approach to entrepreneurial success and used it to develop another eleven companies, all of which have been highly profitable.

Raised along with his brother and sister in Mississippi by Roger and Sheila Morrison, Anthony grew up in a family that encouraged intellectual curiosity, empathy for others and healthy self-esteem. Always independent and assertive, Anthony gave his parents a glimpse of his potential when, at the age of seven, he decided he wanted a Jacuzzi. Told by his mother that he would have to work to earn it, Anthony sold candy bars door-to-door until he had earned the money for the Jacuzzi. One year later, at age eight, he set his sights on buying his father a motorcycle and did just that, enlisting his siblings in the effort. 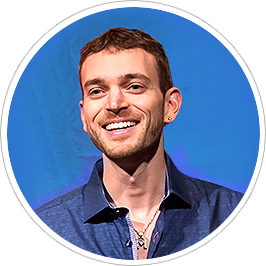 Other successful part-time ventures followed, setting a pattern for his later life: find something you enjoy, learn as much about that subject as possible, and pursue your goals with single-minded enthusiasm. Whether it was selling baseball cards or customizing his prize Mustang, Anthony showed a predilection for achieving his goals and creating avenues to achieve them more efficiently and profitably. Without realizing it, he was creating the blueprint for his later success.

When financial ruin threatened his family, Anthony expanded upon a business he’d had as a teen and established his first company, Cool Blue Performance. Within one year he was working with every parts supplier in the industry; the following year he began manufacturing his own parts and dominating the industry.

The year 2008 saw Anthony expanding into the world of publishing with his first book, The Hidden Millionaire: Twelve Principles to Uncovering the Entrepreneur in You. Part memoir, part inspirational tale and part instructional tome, The Hidden Millionaire brings Anthony Morrison’s template for success to an entire new audience. With his book in the hands of over one million people around the world Anthony hopes to share his story and inspire, motivate, and empower everyone who reads it to create their own success story.

In 2009 Anthony wrote his second book, Advertising Profits From Home, in an effort to teach people around the country how to use his techniques and strategies to create a successful online marketing campaign. Anthony has created a blueprint for a successful marketing campaign and platform for affiliate marketers around the world, and he shares these secrets in his new book.

Anthony filmed a TV show with Mark Victor Hansen, Co-Author of The Chicken Soup Series, to promote his new book on a national level.

Anthony’s show was one of the most successful in the past decade resulting in over one million copies of his book being sold world wide. 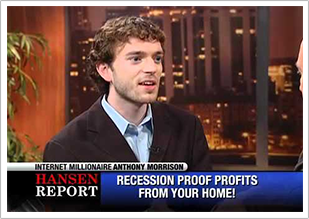 Today, Anthony Morrison travels the country sharing his story and teaching his skills to budding entrepreneurs speaking at large events. He also hosts a weekly webinar training for his students called “The Success Connection” which reaches thousands of people every week with a message focused positivity and marketing strategies to help create more success for his students.